Are you impressed? And in around a week? I certainly am.

I needed to come back and show you what arrived ½ hour before i left on my holiday.
I didn’t have time to do anything with it before i left apart so i just shoved it in the car and it came on the grand tour with us!

Drum roll please. Here’s what i got for the Urban Home Goods Swap from Sheridan. 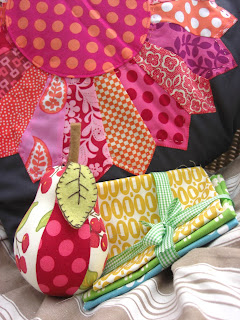 Now i know that i am very easily pleased as i love just about anything that involves sewing or fabric but just look at it!! It’s all the things that make me happy. Dresden, pillow, food (ok i know i can’t eat the pear but it is kinda food!), red, orange....but mostly....PINK!!!
Man i love pink. 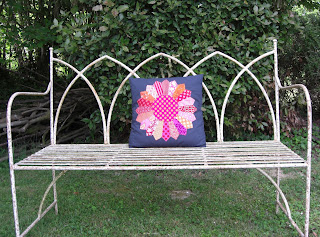 The fab thing is that it even matches the DQS8 i got from Louise. 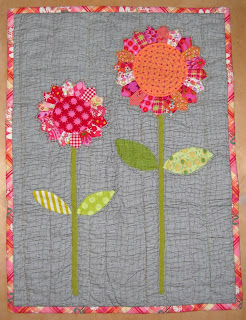 I have no idea whether Sheridan planned it that way, whether both girls KNOW me, or whether we were infact triplets separated at birth!

All i know is that I’m happy.
Posted by Brioni Greenberg

Title edited. Thanks to Sylvie :-) 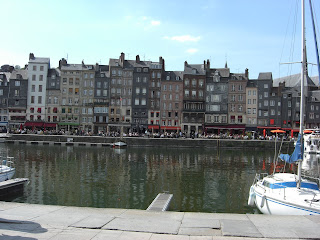 For anyone who’s French that probably means "i have hairy legs" or something but to me it means “We are back from our holiday in France”.
(Well actually, i know it means that as i cheated and translated it in Google translator)

We’ve debated about going to France for a while but i don’t do ferries. I won’t go into detail as the reason i don’t do ferries as it might put you all off your dinner, but i don’t do them. The thought of it even makes me queasy!
Thanks to some friends who we went with who don’t do ferries either, we got to go on the Euro tunnel – yay!! I didn’t think that driving your car onto a train could be THAT cool but maybe we’re very easily pleased.

When you drive the ticket booth it already knows who you are by your car registration number. The screens said ‘Hello M. Greenberg’ (I’m not ‘M’ Greenberg but i assume the M was Monsieur as curly boy had done the booking)

You actually drive onto the train. It’s just like driving into a multi story car park!! 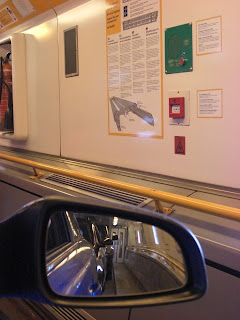 You sit in your car for the whole journey which means i didn’t have to pack up the big pile of papers and bits of fabric off my lap. 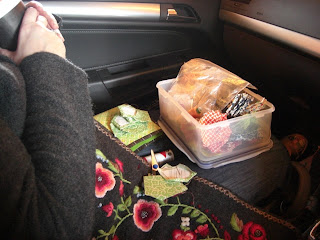 It only takes 35 minutes and then you’re are back out the other end! 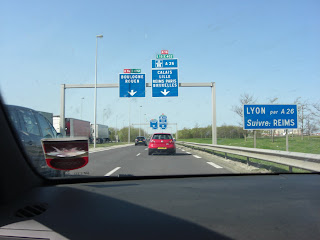 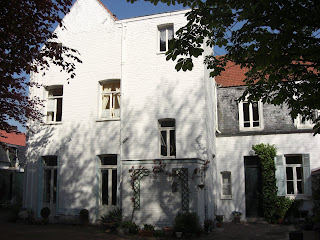 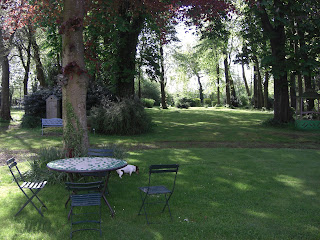 Stayed at the most wonderful cottage for 3 nights 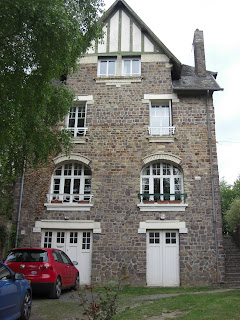 Drove over this fab bridge 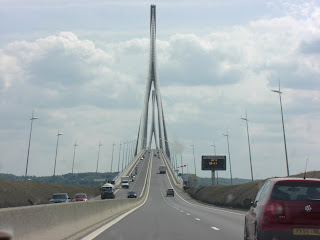 Ate fab French food, although there are no pics. I was too busy stuffing my face to pause to take a pic!

Went to Utah Beach where Curly Boys Granddad landed on D-Day and we also collected some sandy from Utah beach to send home to his rellies in the US. 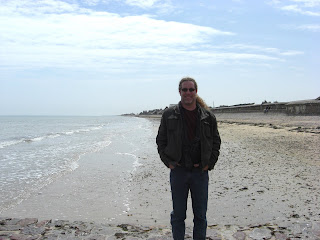 .....and went to the Normandy American Cemetery and Memorial at Coleville Sur Mere. 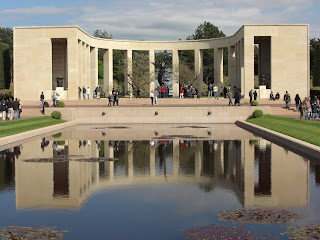 Wow. I can honestly say that i don’t think i have ever felt the way i felt when i turned the corner and all those crosses (and the occasional Star of David dotted amongst them) were in front of us, laid out in perfectly aligned rows. I felt like i had been punched in the chest and for what seemed like an eternity i couldn’t get my breath. 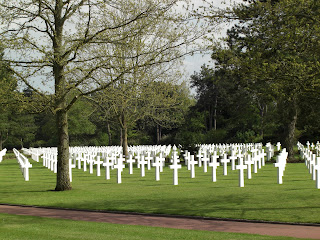 When you hear stories of D-Day it is more often that told from the perspective of military strategy and for those of us that didn’t lose loved ones on that day it is easy to forget about the individuals. The sons, fathers, brothers etc. Each one of those men laid in the cemetery meant something to someone and their lives would be forever changed by the loss.

People talk and poets write about the futility of the war. I don’t think that there was anything futile about what all those men did on D-Day. They were fighting to protect the freedom of the British people and to liberate those who were already under occupation. I don’t pretend to know all the ins and out of WWII but i think that as a result of the D-Day landings they ultimately secured that freedom. That doesn’t sound futile to me.

WWII finished when my parents were still babies and 27 years before i was born but i think it is still very much ingrained in the psyche of Brits. Like the ‘Dunkirk Spirit’ .....and bizarrely a tendency to hoard tinned food! When a friends granddad died in the early 90’s his cellar was absolutely full of tinned food. Much of which had gone out of date in the mid 60's!!

There are so many things to see and do in Normandy that unfortunately we ran out of time before we’d even scratch the surface. We’ll definitely be going back soon though.

I’ll be back here soon too, although i use the word ‘soon' in the loosest of senses! I want to tell what else we got up to on holiday, show you the loot i got and the wonderful contents of a package i received ½ hour before leaving for the holiday!!
Posted by Brioni Greenberg

As you will already know, Fat Quarterly launched on the 27th April and we have been astounded and thrilled with just how wonderfully it has been received. Thank you to all of you from the bottom of our hearts!!

None of us are world renowned quilters nor do we think by any stretch of the imagination that we are experts. We are just normal gals and guy trying to make pretty things and to share how we go about it. Your comments – good are bad – are really valuable so if have any comments or suggestions just nip over to the website or the Flickr page and let us know what you think.

I have been snatching some time here and there and have got more to show you than i thought but i haven’t snapped any pics of some things so you’ll have to make do with what i was up to this weekend! 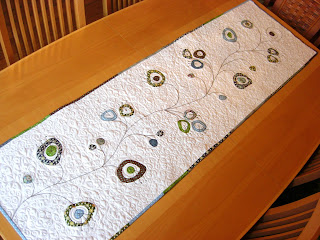 The deadline for the Urban Home Goods swap is looming so i dedicated this weekend to that. I had cut out everything i needed for it but for the last month it’s been pinned to the Moroccan rug wall hung on the wall in the hallway. Again i was given a partner with a very different style to me that really pushed me out of my comfort zone. After the initial obligatory “whatma-gonna-do” panic, i Googled ‘plant shapes’ and ‘organic shapes’ and found some inspiration almost immediately. No dithering for a change. 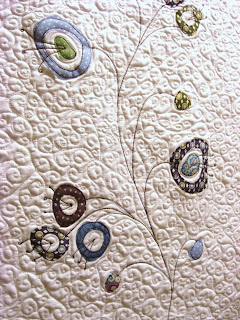 I believe that sewing machines are like hunting animals – they sense your free motion quilting fear!! I find that the more confidently i approach it more successful the outcome.

Many of the tips i have found on the web suggest going very slowly. This doesn’t work for me as i find it more difficult to get my ‘groove’ and my shapes end up looking a bit jerky. So, I just set the machine to a medium speed, took a deep breath, and dived in head first!

I hope my partner likes her table runner/wall hanging. I think she might but i can’t tell you why or that will give the game away :-)

By the way....my friend Melanie has just made the big leap into blogland. She hasn't been sewing very long but judging by her productivity she's well and truly hooked! I'm sure she'd love it if you popped by and said 'Hi'.
Posted by Brioni Greenberg
Newer Posts Older Posts Home
Subscribe to: Posts (Atom)