Has it really being two weeks?

I've had my head down with work and sewing projects and time just seems to be flying by at a scary speed. Where did January go?

The definite highlight of the last 2 weeks has been the pressies - yay!!

Last week my prize from the Joy in the New Year arrived from Krista.
A thread catcher/pincusion combo that I'm not sure how i coped without! I sits on the table next to where i sit on the sofa and is very handy for my bits of thread, and...erm....sweet wrappers. 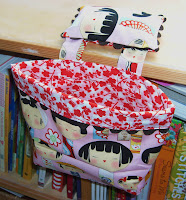 And this week I got this adorable needle book from the lovely Tacha. She's so good to me. 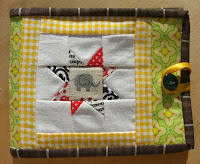 I was the recipient of Tacha's wonderful pillow for the Pillowtalk swap on Flickr - that I'm not sure i ever showed you. She made it to match my wonderland quilt (that i STILL need to get around to quilting!) 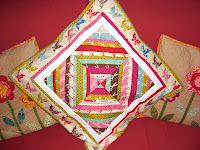 I also received pressies to myself in the form of fabric but i won't show you the pile as it's actually (if i admit it to myself) quite an obscene amount. I tell myself (and anyone else who needs convincing) that i NEED it. Yeah....right!
Posted by Brioni Greenberg

I have finished chewing the first bone and my DQS8 quilt is finished. 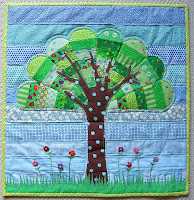 I think i started pulling fabrics out late last Thursday before bed and other than work on Friday i did not leave it alone until i finished sewing the binding on at about 6.30pm on Saturday.
I had no plans on Friday night and Saturday during the day so, i just beavered away – only pausing to make a cuppa or powder my nose.

It’s partly obsession but partly panic. I worry that if i don’t get on with things and get them finished them i will go off the boil and not want to do it, or I’ll forget completely.
I also didn’t know whether i would like this idea so i wanted to give myself oodles of time to make a second one (like i did for DQS7)

The real joy of making this was how the ideas developed as i went along rather than me planning it all before i started. At one point I wasn’t really sure where the green wedges were taking me but as i reached the end of one bit the next step seemed almost obvious. I love it when that happens.

My inspiration was the Dotty For Dresden pattern from the Material Obsession 1 (this is the source of my current Dresden obsession and the reason why i had a wedge ruler in the first place), and the Seasons quilt from Material Obsession 2. The flowers are from this book

I am really happy with it and I just need to make sure i don’t lose it (anything is possible in my tip of a house!) between now and the beginning of March when i can get it in the post to my swap partner.

I wasn’t planning on making a second but i have been fiddling around with some tiny dresdens so I’ll see how they turn out!
Posted by Brioni Greenberg

Dog with a bone

I really should be obsessed with tidying the house, my ironing pile that's threatening to take over the world and my UFOs but instead I'm like a dog with a bone and completely obsessed with these:

My Spiderweb Bee quilt. More ramblings about it here. 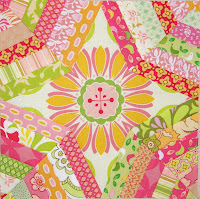 My DQS8 that's in progress. I wasn't sure i was diggin' the bright green but i've made a fair bit of progress since these pics and i'm pretty happy now. These are soooooo not my colours but i think they are my swap partners cup of tea. I hope so anyway! 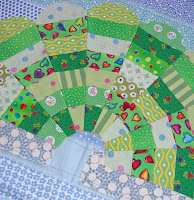 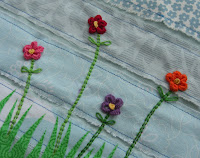 My Dresden plate quilt. Katy and I are quilting along together. Check out her drool-worthy blocks. The navy Bella solid for the background and more Amy Butler Love for the centre circles has arrived so i can get stuck in again!

My Josephs coat quilt. 14 blocks now joined together thanks to a stinking cold last weekend.

And finally this pile that came this morning. Well, my lovely hubby trekked out this morning to collect them from the post office! Drool, drool. 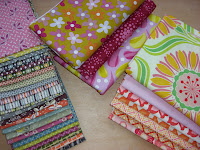 No pain no gain.

My head is chocka block with DQS8 that I can’t think of much else at the moment.

I can’t even think much about all the snow we’ve had and how I’m going to manage to get to my Osteopath appointment tomorrow if i can’t get my car off the street.
No, WAY more important things to think about than that!

I guess I’m not alone in wanting to make THE perfect quilt but as last time, i get stuck on the same questions.

Maybe i haven’t quite stalked my partner enough yet.
I know I’ve got plenty of time so i think i just need to let it sit in my sub-conscious and I’m sure something will pop up.

In the meantime I’ve been working on my Josephs coat quilt for the Quilt-a-long. 14 blocks joined together – yay!!

I suspect if i laid off these and spent less time with my butt parked on the aofa hunched over this then i probably wouldn't even have needed to get the Osteopath in the first place! But, no pain no gain, right?
Posted by Brioni Greenberg

I didn’t actually mean to go AWOL over Christmas but blogging was soon replaced by eating Fruit and nut Toblerone and guzzling advocaat!

I broke up from work on Christmas Eve and i was really ready for a few days of pottering around and just doing a bit of what i fancied, when i fancied. It was bliss.

The UFOs ticked along and by the end of December managed to get 4 quilts finished for Joy In The New Year. I’m pretty chuffed with that as I knew that 12 WAS really over ambitious anyway! Here they are: 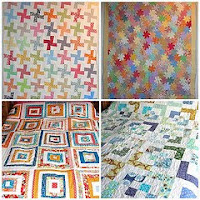 And, i even won a prize over there too. A threadcatcher/Pincushion make By Krista!

I did get some bee blocks done 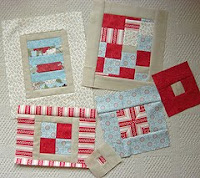 And i did do some more work on this so i think i have 20 blocks done now!

January is likely to be a very busy month as I’ve set myself the task of making quilts for 3 birthdays at the end of January so it’s looking doubtful that I’ll even get the rest of the UFOs all done by the end of this month.

Getting sidetracked by my new 22 degree wedge ruler for dresden plates is NOT going to help!
Posted by Brioni Greenberg
Newer Posts Older Posts Home
Subscribe to: Posts (Atom)